Sign up for the 3DR Lift newsletter for the latest stories, product updates, and more

Two years ago I couldn’t have told you what AUVSI stood for. Audi’s new SUV, maybe. (It’s the Association for Unmanned Vehicle Systems International.) But this year I eagerly attended “Unmanned 2015,” AUVSI’s annual UAV conference and trade show, held this past week in Atlanta. I spent hours and hours touring the booths on foot, taking photos and video and copious notes, speaking with vendors and watching flight demos, and saying things like, “It’s the Association for Unmanned Vehicle Systems International.” I’m still trying to make sense of it all, but the learning is born of an abiding interest now, instead of dumb confusion.

AUVSI is admittedly kind of a weird experience. Especially if, like me, you don’t have a background in aerospace or military. The trade show has traditionally been geared to military contractors, aerospace and other big industry players. Lockheed, Raytheon, AeroVironment and InSitu all were there, boasting the predictably monolithic military-industrial booths. There were cutouts of missiles with “Elmo technology inside!” printed on them. I saw a backpack drone with a “launcher” device that looked like a mini tommy gun. Even the Pelican case booth had a mesh netting-and-desert-camo theme.

But at the other end of the trade show floor, next to 3DR’s comparatively modest (but still oh so cool) Solo kiosks, was a mocked-up set of the French Quarter’s Jackson Square, replete with benches, fake lamp posts and oversize novelty board games, surrounded by buffet tables bearing a bounty of AUVSI-branded sugar cookies and shots of watermelon gazpacho. The only booth here was tucked into the back corner, and it invited you simply to come hang out in New Orleans for a while. Free beads. No drones. (The folks on the New Orleans Board of Tourism are geniuses.)

And so I think it’s especially interesting to note that at Unmanned 2015, Google was there, too. So was Amazon. And SenseFly, DroneDeploy, Precision Hawk, Airware, CNN, GoProfessional Cases, 3DR and numerous other companies with zero military or government affiliation.

The shift in focus was perhaps best captured in an absurd little moment after the conference first introduced our CRO, Colin Guinn, who emceed the keynote talks each morning. After the verbal introduction, Colin hopped onstage and was taken by surprise when the PA started bumping DJ Snake’s “Turn Down for What?!” He improvised a little dance until Li’l John turned down for UAV technology keynote addresses.

Of course, the government was there, too. In fact some of the biggest news to come out of the conference, if not the biggest, came from the FAA. They held not one but two press conferences, one to announce their new B4UFLY app and the other to announce new corporate partnerships on researching Beyond Visual Line of Sight (BVLOS) flight technology, which they call the Pathfinder program.

The free B4UFLY app informs hobbyist drone users of any regulations or requirements that limit or prohibit flying, based on their location. It knocks the wind out of AirMap, a similar app launched just last week by Ben Marcus (of NoFlyZone.org) and Gregory McNeal. The government giveth and the government taketh away… Well, as long as it’s only taking away from a few people, we’re cool with it. That’s how democracy works — right?

The cool thing about B4UFLY to me is that it’s an actual FAA app — authorities confer authority. Were your maps or regulatory info inaccurate or out of date? Hey, you were using the FAA’s own app. While we can achieve much the same functionality with software — Droneshare, for instance — these regulations are notoriously recondite and mercurial, and will only be changing faster in the future. If the FAA wants to assume the responsibility and the accountability for keeping this resource updated and accurate (and official), more power to them.

The more important announcement, from an industry perspective, was the BVLOS Pathfinder announcement. After the FAA released its proposed drone regulations in February, people took to the net in droves to voice complaints that the FAA seemed to be requiring that all unmanned flights would have to be conducted within strict visual line of sight. Such blanket restrictions on BVLOS flight would ground drones in many industries — delivery, agriculture, oil and gas, among others — not to mention limiting R&D across the board.

In announcing Pathfinder, the FAA signaled that they’re not only willing to listen to the public and to private industry, but that they actually do listen. Contrary to what I thought as recently as January, the organization seems to have the will and capacity to change their mind — or at least relax their orthodoxy.

What’s even more exciting, the FAA’s chosen corporate partners for Pathfinder weren’t Boeing, Lockheed or AeroVironment; they were CNN (news gathering), Precision Hawk (agriculture) and BNSF Railway (industrial inspection). (Precision Hawk uses our Pixhawk/APM autopilots, and BNSF has FAA approval to use our Spektre industrial inspection drone.) This would seem to indicate that the FAA understands that drone technology will mean great things not just for the big pockets of the aerospace players, but also for a host of smaller companies, and for the economy overall.

Of course 3DR was there with Solo, the world’s first smart drone.

But IRIS+ made a cameo, too. Panoptes Systems tricked IRIS+ out with an ultrasonic sense-and-avoid set, and performed a successful flight demo. Sense and avoid was a big deal at many booths this year, and certain to be the next major advancement in consumer UAV tech. 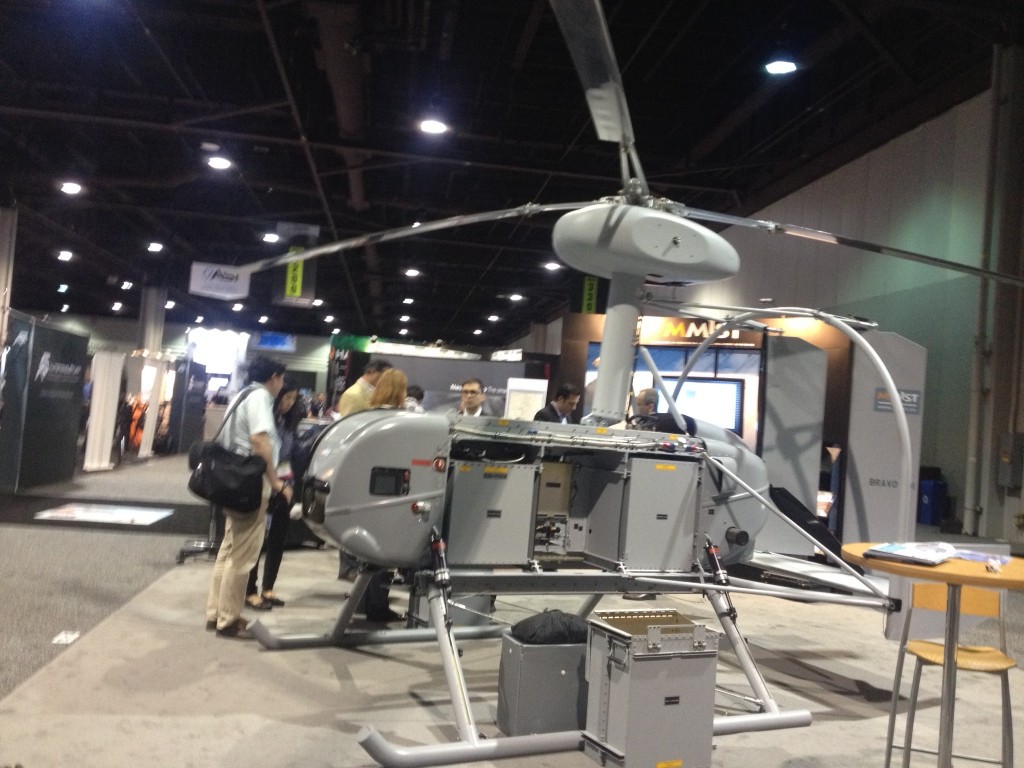 From quadcopter to gyrocopter. Here’s an auto-gyrocopter, the SnowGoose Bravo from Canadian company MMIST. The top rotor doesn’t have a motor. Instead, its rotation is generated by wind that gets under the blades as the motor in the back pushes the copter forward. The SnowGoose is designed for unmanned cargo dropping, and offers smart parachute delivery technology that helps guide packages to their destination.

SenseFly was demoing their latest quad (eXom) all week long. The drone features a three-way camera that lets users capture and geotag video, still and thermal imagery, all in the same flight if you want. eXom’s also got five dual sensors (visual and ultrasound) positioned around it for a highly effective sense and avoid system that facilitates nail-bitingly close inspection approaches. Price unavailable, but speculated to be in the neighborhood of $15,000, perhaps more.

Flight control platform innovators Airware had a booth not far from ours, where they were demoing their ground control station software. Airware’s platform runs on a proprietary closed flight controller, which works together with an open app interface and cloud services to deliver an end-to-end solution. Apps are coming this summer, they told me.

Even states had booths this year. North Dakota was next to Nevada, competing to lure major UAV research dollars to their FAA-sanctioned airspace. Chief selling points? Nevada: We’ve got Vegas. North Dakota: They’ve got Vegas.

And you asked for it: Here’s an admittedly not-so-comprehensive look at the new Solo Backpack. GoProfessional Cases had a prototype hanging next to their own Solo hard case ($209).

3DR Partners with Esri to Launch the ArcGIS Drone Collection

3DR is proud to announce that we’ve entered into a three-year corporate licensing agreement with PCL Construction to standardize on Site Scan across all of their districts, offices, and projects...